The U.S. peanut industry must solve the problem of aflatoxin and change perceptions about quality.

The NPB works diligently to promote peanut consumption and has made significant strides toward solving the allergy problem. So, this is good news; however, it was a time when most of the country was eating at home instead of dining out.

At the South Carolina peanut grower’s meeting in late January, Premium Peanut CEO Karl Zimmer says it is okay to look at individual numbers, but he and other industry analysts tend to look more at trends.

“We are growing more than we consume,” Zimmer says. “Peanut farming gets more productive, but domestic demand has not grown at the same rate. At about 1% a year, it is positive, but not keeping up.”

“Acreage in the Southeast has been steady the past two to three years, with each between 1 million to 1.1 million acres,” says Cotton.

“In the V-C region, the average yield was 4,349 pounds per acre and that is 150 pounds more than ever before. It was the highest ever yield on average,” says Cotton.

Challenges In The Export Market

• 71% of customers for U.S. peanuts, both domestically and internationally, have specifications less than 10 parts per billion.

• Many customers require multiple tests with all tests under that standard and/or testing of adjacent lots.

• Codex, the United Nations and other customers are now ordering additional regulations.

• U.S. peanuts are no longer the preferred product internationally, primarily because of the perception of quality.

What about the export market to take up the excess production?

With exports increasing and going to more than 30 countries around the world every year, this could be considered a success.

“Or is it?” he says. “When you look at the price per pound for exports over those three years, exports went up, but the amount collectively that we are getting paid for our product has gone down every year. This highlights a challenge we have as an industry.”

Volume Up, Price Down

“We need to grow exports,” Zimmer says, “but we need to get paid for those exports and the reality is, unfortunately, this is not a good trend. We are exporting more but getting paid less.”

“We can look at every other market in the world, Mexico, Canada, Europe and Japan – all important markets, but if you want to understand what is happening to supply and demand on peanuts, look at China,” he says. “China grows 10 times the peanuts we do. Still, they are the largest importer in the world and also the largest exporter.”

“China does have quality product as well,” Zimmer says. “Japan demands the highest-quality peanuts in the world and their main supplier is China. The No. 1 supplier of the highest quality market in the world is not the United States. That’s a problem.”

The European market is also one that demands a high-quality product and is willing to pay for it.

Unfortunately, Zimmer says the United States has lost that market to Argentina. “The Europeans want a product we can’t provide.”

Zimmer says, “What drives the market’s pricing? The No. 1 thing is aflatoxin. If you want to know how profitable or unprofitable the peanut industry is in any one year, look at aflatoxin. In my view, it is the single largest threat to the industry.

“We could have shipped it to China at a 20% discount, but that doesn’t help,” he says. 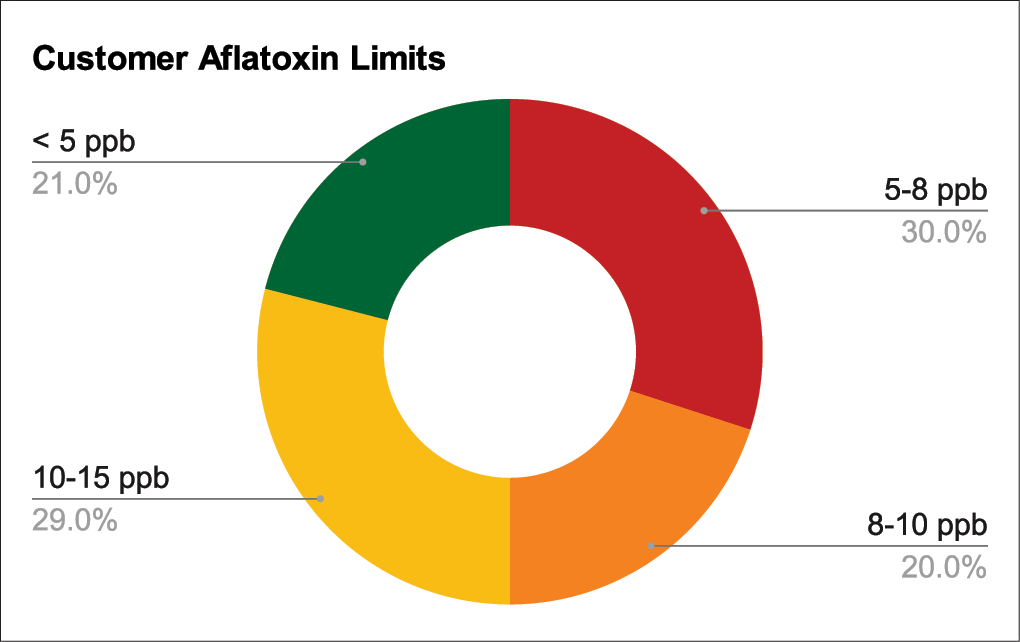 A Standard We Can’t Meet

Why does Zimmer say we have lost Europe?

“Their standard is 2 parts per billion. That’s 1/4 of a kernel in a whole truckload,” Zimmer says. “Above 2 parts per billion and they won’t take it. So, for us to be able to grow exports, it comes back to solving the aflatoxin issue as an industry.”

In late November 2020, the American Peanut Council brought all segments together for a peanut quality symposium to discuss aflatoxin.

Yet another challenge is knowing and understanding the regulations customers are asking of their peanut suppliers.

“One of those regulations is that I certify that no one in my entire supply chain, which includes all of my growers, will have anyone working on the farm under the age of 18, even if they are your own children. That is level of oversight our customers are demanding.

“They can’t get our government to negotiate this. They can’t get our current or former administration to the table to discuss this, so they are bypassing governments and going straight to the companies that want to sell products in the European market. They are forcing you as a seller in the European market to do what no administration will do. That’s what we are faced with. That’s the challenge.”

But it is the perception on quality that Zimmer thinks can be improved.

“I believe as an industry we can change the perception that U.S. peanuts are not the highest quality,” he says. “We can change that if we focus on things like aflatoxin. We can regain markets where they are all willing to pay for the high-quality product that we know we can produce. But we must work together.

“U.S. peanuts are no longer the preferred peanut internationally, but we can solve this.

“We must work together across the supply chain — with seed breeders, growers, buying points, shellers, all segments — to maximize the value of the product because we can change these perceptions.” PG