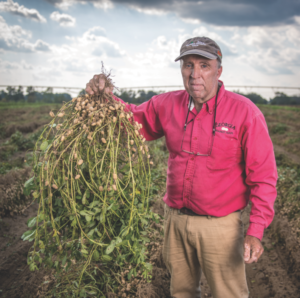 A well-known scientist in the peanut industry, University of Georgia College of Agricultural and Environmental Sciences research pathologist Albert Culbreath has been named a Fellow of the American Phytopathological Society.

The society grants this honor to members in acknowledgement of distinguished contributions to plant pathology or to the APS. The Fellow recognition is based on significant contributions in original research, teaching, administration, professional and public service, and/or Extension and outreach.

“Being named a Fellow is a scientific society’s greatest honor,” says Sam Pardue, dean and director of CAES.

A professor of plant pathology at the University of Georgia Tifton Campus, Culbreath is recognized as a leader in the ecology, epidemiology and control of thrips-vectored tomato spotted wilt virus and of early and late leaf spot diseases of peanut.

He has authored more than 200 journal articles and book chapters and been a co-developer of five TSWV-resistant peanut cultivars.

Culbreath was also a co-developer of the TSWV Risk Index and Peanut Rx educational tools that helped ensure economic viability of peanut production when the disease threatened the industry’s existence in the 1990s.

He has been a significant part of the multidisciplinary team that has produced an integrated spotted wilt management program combining multiple suppressive factors to control the disease. Adoption of the integrated system coincided with a dramatic decline in annual losses to TSWV in peanut.

As a part of this work, he documented slower epidemic development in several cultivars and breeding lines than in Florunner, the predominant peanut cultivar at that time. Culbreath characterized the field reaction to TSWV of numerous breeding lines from multiple peanut breeders, several of which have been released.

Culbreath’s work on integrating resistant or tolerant cultivars with suppressive cultural practices is applicable to both organic and conventional production in developing countries as well as the United States.

Recently, he and UGA colleague Katherine Stevenson co-authored the chapter on fungicide resistance in peanut pathogens in the second edition of “Fungicide Resistance in North America.”

He has served on 41 graduate student committees and been the major professor for seven master’s degree students and four doctoral candidates. He teaches “Introductory Plant Pathology” at UGA Tifton.