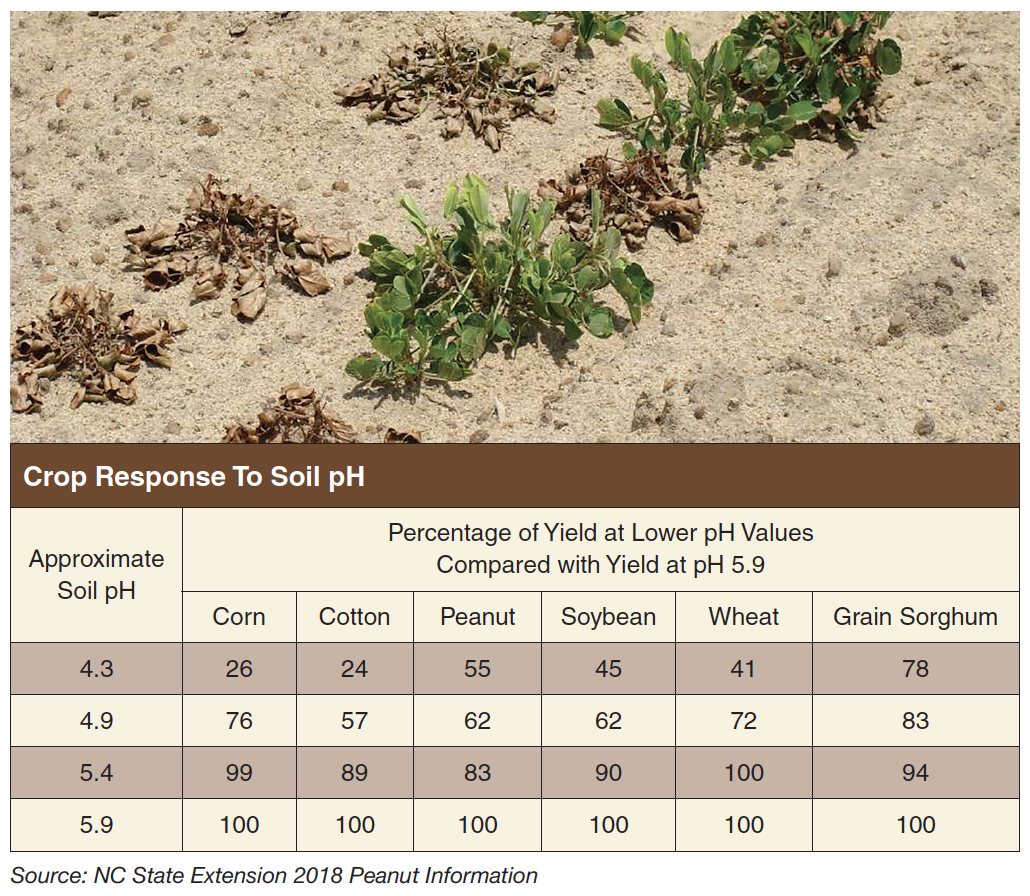 Although it can be overlooked, proper soil pH is critical to high-yielding peanuts.

For the most part, producers can keep the pH of their soils in optimum range, but depending on uses of the land, soil amendments added or not added, over time soil pH can get off kilter. Unfortunately, when this happens, says Glen Harris, University of Georgia soil scientist, it is often not the first thing farmers think of.

“Several members of the UGA peanut team were called to a field to try to figure out what was happening to some peanuts in a field. Was it a seedling disease problem? Was it injury from herbicide carryover?

“It turned out that the soil pH was around 4.7, and instead of typical zinc toxicity symptoms, which cause flattened, red and split stems, I think it went straight to aluminum toxicity,” says Harris, who recommends a soil pH of 6.0 to 6.5 for peanut fields in Georgia.

At that point, the plants were dead and there was no recovering from the low pH. “A producer was able to gain access to a new field to plant peanuts in, but he found out a little too late that it had high levels of zinc. Of all the nutritional factors and toxicities that we can have in peanuts, zinc toxicity is one thing we can’t correct in the short term and even in the long term, it would be difficult.

“Be careful about fields you don’t have experience with,” Jordan cautions. In the 2018 NCSU Peanut Information, a soil pH of 5.8 to 6.2 is recommended, provided that other essential elements are in balance and available to the plant.

It Needs To Be ‘Just Right’
But it isn’t always a low pH, sometimes Harris says it can be too high as well.

“A pH that is too high can cause manganese deficiency, which probably doesn’t hurt you too bad, especially late in the season. But what I am concerned with, if you have a high pH and you put out a lot of lime, which also has a lot of calcium, it can cause potassium deficiency.

“This has to do with the cation-exchange capacity of the soil and positive and negative charges on these elements, but if you get your calcium levels really high, even though the peanuts might look okay, it may be causing the potassium to leach out of the soil.

“Think about it — if you have peanut after peanut and you take the hay off as well, you are taking the potassium out of the soil and not putting it back,” he says. “A soil test should catch these things.”

Jordan says in the Virginia-Carolina region, soils that are too high in pH may help increase the incidence of Sclerotinia blight.

“Also, the use of manure, primarily broiler litter, increases concern regarding micronutrient toxicity. Growers are cautioned not to overload fields with high levels of waste products, as micronutrient levels can build up quickly.”