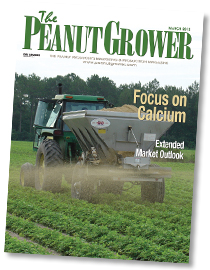 Who is buying peanuts as fast as they can be shelled?
Unbelievable, warehouse buster, tidal wave, record breaker – these are just some of the words being used to describe the 2012 crop by economists and industry market watchers. This crop didn’t just break records; it destroyed records by a wide margin. The up-and-down nature of the peanut market for the last 10 years means that with 2012 being up, and way up, 2013 can be expected to be down.

“It’s unbelievable that we had the crop that we had and that we handled it,” says Tyron Spearman, executive director of the National Peanut Buying Points Association and marketing editor of Peanut Grower. “According to Federal State Inspection Service, 3,379,000 tons were delivered. Of those, 573,000 were bought as they crossed the scales for immediate use, with 2,600,000 tons in the loan.”

Reasons Beyond Acreage Increase
Several factors went into the huge crop and, as Spearman puts it, “all the stars lined up” for a simply huge crop.

“We have been on a roller coaster ride for a number of years,” says Dell Cotton, executive director of the Peanut Growers Cooperative Marketing Association in Franklin, Va. “The quality issues of the Southeast crop in 2010 and 2011, along with the record-low acreage planted to peanuts in 2011, because of cotton prices, led to near record-low supplies after the 2011 crop.”

Prices shot up and acreage was increased 44 percent over the previous year. In reality, a very small portion of the crop was contracted for the higher price.

Bucking The Yield Trend
Besides the significant increase in acreage, the average yield was a record by a wide margin.

Nathan Smith, University of Georgia Extension economist says the average yield for all states had been trending upward because of new, higher-yielding varieties.

Much of the credit goes to newer, higher-yielding varieties, but everyone knows that weather plays a big part.

“We did not get the severe heat in August,” Spearman says. “In Tifton, the average temperature was 89 degrees when it is normally over 100 degrees. Also, in August, we got some really good rains at the right time and that helped to keep the temperature down as well.”

Who Is Buying?
Now, the industry must figure out how to sell a big pile of peanuts.

“We have twice as many in the warehouse on this date as we did last year, but shellers are going as hard as they can because people are wanting the peanuts,” Spearman says.

Who’s wanting peanuts? China, says Spearman. “Prices dropped in Rotterdam, and China is buying. China grows a lot and usually buys from India as well, but this year they are buying from the United States.”

So the export market has rebounded, but now it’s the domestic market that’s in decline.

Cotton says we have lost consumption due to the higher prices of last year, even though the $1,000-per ton price was only paid on a small portion of the crop.

“Current peanut product prices reflect this past year’s contract prices, and it will be much later before the oversupply will be reflected in consumer prices.”

Hope For Consumption To Rebound
About 40 percent of the 2012 crop was contracted, and that’s slowing down prices dropping in the grocery store because those higher-priced peanuts need to be used up first.

Spearman says the market, overall, is slowly moving. “We are whittling the pile down. The question is, ‘how fast can we do it?’”

In all likelihood, the 2012 record crop will hang over the market for the next couple of years.

“You are taking significant risk if you plant peanuts with no contract or in excess of the contract,” Cotton says.

Smith says he thinks shellers and manufacturers will try to find a price that will drop acres below 1.2 million. “I expect $400 or lower contracts at first.”