Scouting is the best way to find problems before it is too late. 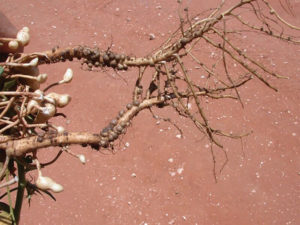 Rainfall or irrigation is needed in peanut production for many reasons, including activation of pest products. With the lack of moisture in the early season, pests preferring hot, dry conditions, such as lesser cornstalk borer, were able to establish significant populations.

“Lesser cornstalk borer (LCB) is the most destructive insect pest of peanut in the Southeast, and it thrives in hot, dry conditions,” says Mark Abney, University of Georgia Extension entomologist. “The most important thing a grower can do is monitor fields regularly and take appropriate action if/when infestations are discovered.”

What Is Most Important?

Abney says three insecticide active ingredients are recommended by the University of Georgia for LCB management in peanut: chlorpyrifos, chlorantraniliprole and novaluron.

“Chlorpyrifos (Chlorpyrifos 15G) can only be applied as a granular product banded over the row. It requires rainfall or irrigation for activation, and applications are often followed by outbreaks of caterpillars and/or mites. Chlorantraniliprole (Prevathon) and novaluron (Diamond) are applied as broadcast foliar sprays, both of which have provided good control in UGA trials without additional water.”

Abney says it is important to remember that while LCB does not survive well in moist conditions, one or two rainfall events will not eliminate an established population, and it will probably not be possible to “irrigate LCB away” prior to row closure.

As soon as rains do start, growers can expect a big flush of weeds.

“Overlapping residuals are the foundation for managing weeds in peanut,” says Mike Marshall, Clemson University Extension weed specialist. “As soon as it is feasible to drive in your fields, prepare for the next herbicide program, with a residual component, depending on current peanut growth stage.

“In addition, any emerged weeds that were sprayed during the dry period may yet recover after the rains if they were larger than 4 inches during the drought.”

Marshall says as with the early postemergence application, target weeds that are small and actively growing.

“In planning for overlapping residuals in your herbicide program target about 14 days after the early postemergence application to apply postemergence herbicides, such as Cadre, 2.4-DB, Storm, Basagran, Blazer or Cobra, along with a residual herbicide partner, such as Warrant (up to flowering), Zidua (up to pod formation) or Outlook (up to 80 days before harvest).

Another area to scout is for nodulation of the crop. As a legume, peanuts convert atmopheric nitrogen into a form that can be used by the plant, known as nitrogen fixation, but only through a symbiotic relationship with bacteria. The peanut plant is simply a good host to the Rhizobia bacteria, which infect the roots and do the work of converting the nitrogen.

Applying an inoculant at planting is a cost-effective way of ensuring the bacteria are present in close proximity to the seed so that this process can begin as early as possible in the life of the seedling.

For producers in less-than-hospitable conditions, such as West Texas, scouting to ensure adequate nodulation of the crop is recommended.

“If you applied an inoculant to your legume crop seed at planting and later find little to no nodulation, this is important for two reasons,” says Emi Kimura, Texas A&M University Extension peanut specialist. “First, of immediate concern, you are not getting the nitrogen nutrition you may have expected for your crop. Thus, fertilizer N may be needed to obtain your yield potential.

Early Planning For Next Year

“Second, if you have no nodules then it is important to understand why. Was it the wrong inoculant, an expired inoculant, due to improper application or was the inoculant introduced into hot, dry soils where the bacteria did not survive long enough to infect the roots?”

Besides the mid-season check, Kimura also recommends an end of season follow-up scouting.

“A second nodulation check for peak nodulation for Texas High Plains peanuts, later in the season about mid-August to early September, will confirm early observations. Other peanut regions should make this assessment four to six weeks before physiological maturity.

“The late scouting allows you to flag fields that nodulated poorly. If nodulation remains low, consider why nodulation might not have occurred and what you can do to enhance nodulation in next year’s crop,” she says.