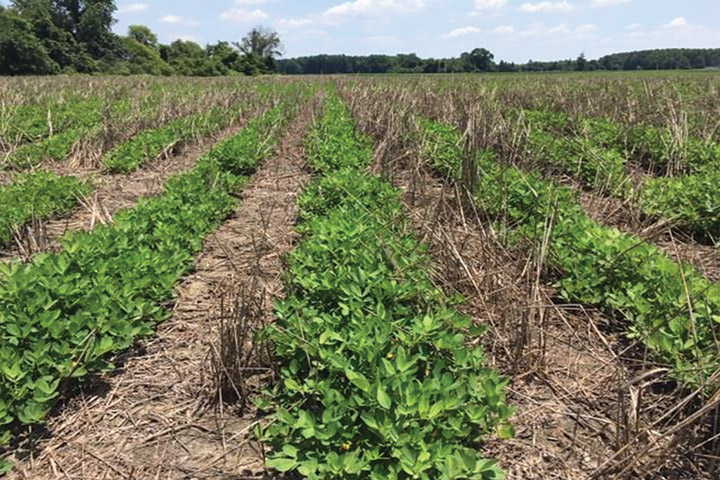 Tillage systems, twin rows and seeding rates are topics to consider before next planting season.

Q Should I transition my planting pattern to twin rows?

In addition to optimizing photosynthesis as quickly as possible, fewer early pegs are lost because soils are cooler from shade offered by plants in twin rows. These sandy soils are about the only soils that respond to starter nitrogen fertilizer.

Pushing early season growth on hot, sandy soils can help save the early pegs and often promotes earliness with respect to maturity. Some of these findings are supported by my previous research and also in recent work presented at the American Peanut Research and Education Society by Paul Smith, North Carolina Cooperative Extension, Gates County.

In the study, “Peanut Response to Twin-Row Planting in North Carolina,” Smith found that twin-row planting pattern with rows spaced 7-9 inches apart on 36- to 38-inch centers accounts for less than 10% of acres. But in the county Smith serves in, Gates County, approximately 40% of growers use this planting pattern.

Although input costs are increased because of slightly higher seeding rates and increased inoculant and in-furrow insecticide costs, Smith found that growers increased yield by 200 to 400 pounds per acre. It also results in slightly improved market grade factors, such as the percentage of extra-large kernels and sound mature kernels.

Additionally, earlier NCSU research supports some of the suggestions made by farmers in Smith’s study that less tomato spotted wilt has been documented, and yields in some instances are greater in twin rows compared with single rows.

Finally, Smith found that although twin rows can result in suppression of weeds, the level of suppression does not negate the need for an effective herbicide program. Research also suggests that row visibility within a few weeks prior to digging can be decreased in twin rows compared with single rows, but this response can be variety dependent.

Q I’m on 30-inch rows, do I still need to have five plants per foot of row?

A Yes, the difference in 30 and 36 inches is not huge, and the in-row population needs to be the same for both. Would there be any difference if peanuts were planted in narrower rows, say 15 or 20 inches?

My answer to that is based on work we did over a decade ago when we compared single rows, twin rows and a configuration I called narrow twin rows in which we dropped in between two regular sets of twins on 36-inch rows with another twin-row unit.

Planting in 30-inch rows does allow one to match equipment for all crops on their farm. But from what I have seen, there will be no significant difference in yield with twins compared to 36-inch single or twin rows. Narrower rows and twin rows are more expensive based on seed, insecticide and inoculant costs per acre.

Q In sandier soils, should I opt for a reduced tillage set up?

A As I travel around and speak at state and county meetings, I survey growers and have included questions related to tillage practices. Although an informal measurement, we have found the use of reduced tillage has increased. In the most recent surveys in North Carolina, about 30% of growers responded to using reduced tillage. This was an increase from 20% in 2014.

South Carolina and Virginia producers using reduced tillage was higher than I expected based on the surveys measuring approximately 90% and 70%, respectively.

In North Carolina, as we have transitioned to sandier soils that tend to be more conducive to peanut production, there is greater flexibility in tillage systems, especially when it comes to efficient digging with minimal pod loss. Many growers prefer planting on raised beds rather than flat planting. The beds often give faster germination and early growth, provide drainage and may reduce pod losses during digging.

Additionally, with an increase in the number of disease management options, most notably effective fungicides, this has decreased the need for deep tillage to bury residue. Longer rotations improve disease management efforts as well.
According to the survey, about 5% of producers are still using a moldboard plow, called braking or flushing in some areas of the state. In 1998, more than 60% of growers were moldboard plowing.

An advisory index has been developed to assist growers in deciding the risk of peanut yield in reduced-tillage systems compared to conventional tillage. Peanuts are often more responsive to tillage systems because of the digging requirement. Research also suggests that prior cropping history generally does not affect peanut response to tillage.

The risk advisory index can be found in the “2019 Peanut Information,” published by NCSU College of Agriculture and Life Sciences and N.C. State Extension and found at https://peanut.ces.ncsu.edu/.