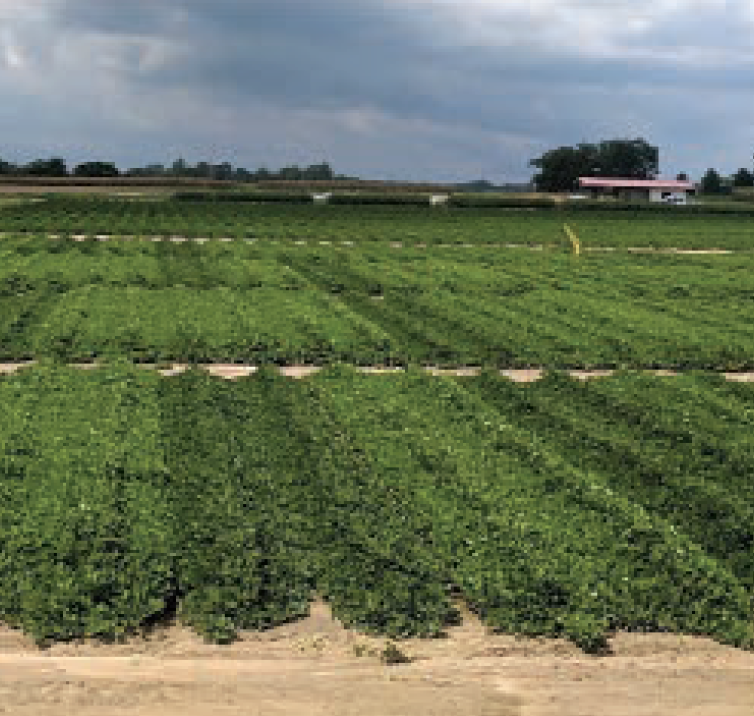 Make decisions on an individual field basis, weighing the cost against potential benefits. Prohexadione calcium is the only plant growth regulator currently registered for use on peanuts. It is sold as Apogee or Kudos and is formulated as a 27.5 percent wettable granule.

For the most part, researchers have found that prohexadione calcium will reduce vine growth, create better row definition, which allows for more accurate digging, and may reduce pod shed. In turn, this reduces digging losses, speeds drying time and promotes harvest efficiency. However, research has also shown that applying prohexadione calcium at the wrong time or rate can cause harm to the crop, and achieving a yield benefit is inconsistent.

It is critical to know when prohexadione calcium should be applied in peanut and when it should not, Monfort says.

“Prohexadione calcium should be applied when 50 percent of lateral vines from adjacent rows are touching. It should also only be used in irrigated fields where vine growth is excessive,” he says.

For Virginia-type cultivars, sequential applications of 7.2 ounces per acre spaced two to three weeks apart are generally needed, Jordan says. Include a crop oil concentrate and nitrogen solution (UAN) or ammonium sulfate with prohexadione calcium to help with plant uptake and consistency of performance.

Monfort says that unlike results on Virginia-type peanuts, his research has found that using the labeled rate of 7.25 ounces per acre applied twice has shown some negative impacts on yield and grade in runner cultivars.

Thus far in his research, Monfort says the greatest benefit of using prohexadione calcium has been reduced vine growth of newer, more vigorous runner-type varieties on irrigated peanut fields with high levels of residual soil fertility. However, even under these conditions, use of the PGR may not be economically justified.

Make any decision to use prohexadione calcium applications on a field-by-field basis under the conditions of potentially excessive vine growth. For his research data, Jordan says, “When pooled over 121 trials from 1997 to 2014, yields following two applications of prohexadione calcium were 96 pounds per acre higher than yields from non-treated peanut (4,223 pounds per acre versus 4,319 pounds per acre). However, environmental conditions and subsequent vine growth were not excessive in some trials in this data set, suggesting that yield difference may be underestimated.

“In general, about 20 percent of the time we would see a yield increase,” he says. “But it’s not always consistent.”

Within a type, variety and environmental conditions are key factors in determining growth pattern and amount of vegetation.
For example, the variety Bailey has more robust foliage growth than the newer, high-oleic variety Sullivan.

“With the variety Bailey, very few differences in yield with prohexadione calcium have been noted over the past few years.

“Research from many years ago demonstrated that reducing pod shed was one way prohexadione calcium protected yield.

“In a trial this past year, there was a modest increase in yield when peanut was dug on time,” he says. “When digging took place about two weeks after the optimum digging date, yield was considerably greater when the plant growth regulator was applied.

In this particular trial we had significant leaf spot pressure.”

Jordan says, “There may be value in using prohexadione calcium when digging is delayed and significant leaf defoliation occurs.

We plan to look at this in more detail in 2018. But the product is expensive.”

Overall, both researchers agree that a decision to use prohexadione calcium must be made on an individual field basis, weighing the costs against the potential benefit.