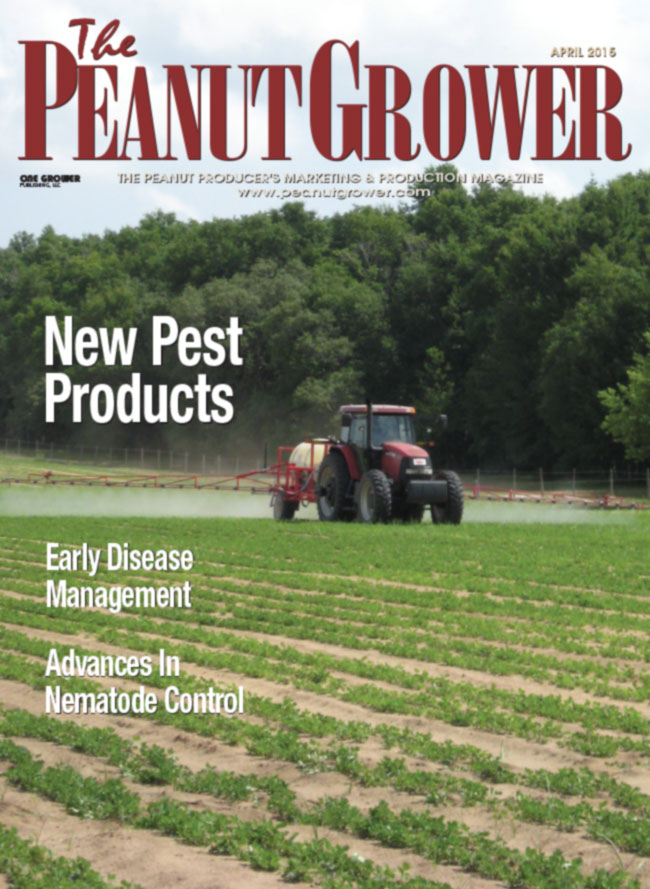 Make sure your seed are certified and properly handled

The American peanut industry is poised for growth and expansion. Analysts are predicting a 20 to 25 percent increase in acreage for the 2015 season. Since farmers learned more about Price Loss Coverage (PLC) in the new Farm Bill and hear predictions of a $100 per-acre payment in October after the crop, peanuts seem to be the most profitable option.

Many producers have learned that the peanut base is a valuable, protective umbrella, and under the new Farm Bill, peanut farmers have 1,444,858 acres of approved base. Whether you plant the peanuts or not, a payment could be triggered. Producers with cotton base are double blessed. These producers do not have to plant their peanut base acres, but may option to plant the cotton base, now a generic base, to peanuts.

The question is how many peanuts will be planted this season. The conservative estimate is a 20 percent increase. For the United States, that means 1,600,000 acres in 2015, up from the 1,340,000 acres in 2014. With an average yield of two tons per acre, that is a crop of 3.2 million tons. A total demand of 2.6 million tons means a 600,000-ton surplus of peanuts. Add to that the 900,000 ton carryforward of today and the U.S. has a large peanut surplus to push prices lower. USDA will issue their first acreage estimate on March 31.

With a great increase in acreage, seed availability could be a problem. Germination certification is slow going at USDA testing stations. Seed prices for runners opened at 67 cents per pound for Georgia-06G, the variety that composes 86 percent of the available seed.

Another seed seller opened at 70 cents per pound and even a two-cent premium for high-oleic seed, which is limited. As seed becomes scarce, beware of “outlaw” seed or seed not certified or properly managed under the Crop Improvement Association in each state. Illegal seed spells nothing but trouble, so be warned.

When manufacturers heard of an increase in peanut production, they decided to delay orders, expecting prices to be lower near harvest. Shellers opened contracts early with a $400 per-ton contract on runner-type peanuts in the Southeast. Limited tonnage was quickly gobbled up and now the peanut market at the local buying point is dead and contracts are not available.

One company offered a flex contact whereby growers that sign a contract could follow the market with a floor of $380 per ton, which equaled 47 cents per pound for raw-shelled medium runners. Peanuts dropped to about 45 cents per pound, so the flex contract is not active either.

Contracts have been absent in the Southwest and in the Virginia-Carolina region.

U.S. peanut usage is soaring, especially for peanut butter. January Peanut Stocks and Processing reported that usage jumped 15.5 percent with a 25.3 percent increase in peanut butter usage. That is amazing. Candy and snacks were slightly lower than normal. The good news for peanut growers is that manufacturers are introducing new products, filling supermarket shelves as peanut usage is up 7.5 percent for the first six month period, led by peanut butter, which was up 12.7 percent.

The United States has become the lowest-priced peanut on the planet, and peanut buyers are coming to U.S. shellers for supplies. For the six-month period August through January, U.S. peanut exports are up 9.6 percent. January was up 38 percent versus January one year ago.

Most analysts predict that a U.S. peanut surplus will mean major shipments abroad. However, officials warned shellers that exporting peanuts could be problematic. Union labor issues, capacity problems and equipment shortages, such as chassis, at major ports are already causing delays of export products. The advice was to book as early as possible and to consider using alternate ports of discharge.

Don’t forget about foreign competition. Argentina is reporting a good, aflatoxin-free crop, and a problem-free harvest could launch that origin into major competition with the United States. Get Ready to Roll

March 31 was the deadline to visit your Farm Service Agency to update base and payment yields. Production should have improved in the last few years, and a farmer could be leaving money on the table if yields were not updated.

Most producers optioned for the Price Loss Coverage. Partner up with a local buying point that has a relationship with a sheller approved by USDA to issue Market Loans. That buying point or sheller must also have USDA-approved storage.

Make sure your seed is certified and pure. The worst problem may be a poor stand caused by poor seed.

Think Before You Plant

Producers are still urged to be conservative. It would be a shame for the industry if peanuts were planted wall to wall, further destroying the present peanut market. Surviving low prices will be difficult for the grower without an above-average yield. The government does not want your extra peanuts, which will push prices even lower and leave only a hope that domestic and export markets can expand quickly. Stay with or start a good rotation, and let’s plan to stay in peanuts beyond next season.