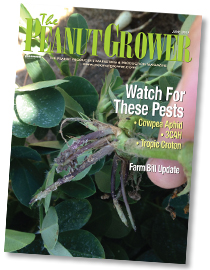 No contract offers to encourage peanut planting
By J. Tyron Spearman
Contributing Editor
Every peanut year is different. But 2013 is mounting to be the most unusual in the history of the peanut industry. Planting has begun in most regions without any signing of contracts, and never before has China been a prominent factor in the peanut market. Plus, it will take longer than one year to shell the 2012 crop with all shellers running full tilt.

Too Many Peanuts
Manufacturers and shellers seem to think that the over-supply of last year will be enough for 2013 when considering those producers who will plant for rotation or cooperative obligations. No one is offering a price to encourage more acres of peanuts, but other commodities could become so attractive that farmers forget about peanuts. Even those producers who direct contract have not signed anything by mid-May, planting time in the Southeast. The planting of high-oleic varieties is being encouraged, but no premiums are being offered.

The industry has discovered its monthly shelling capability limitation is approximately 225,000 million metric tons farmer stock. That is the full capacity of all shellers combined. The record crop will take beyond January 2014 to shell.

Wait And See Situation
With all this, Mother Nature is not cooperating either. Some producers wanted to plant corn, but March and April were too wet and corn seed was returned. April conditions were both wet and cool, and even May was much cooler than normal. A farmer’s option now is cotton or peanuts and, in some areas, soybeans. Cotton prices deserve a watch as it approaches 90 cents per pound. Again, the cotton situation is controlled by China, but a farmer can cover risk on the futures market.

China Factor
Although China produces the world’s largest peanut crop, ranging from 14 to 18 million metric tons, most of it is crushed, and China needs more. Increases in population, rising middle class incomes and the general need for more of everything in China brought surprise to the USA peanut industry.

Large quantities of peanuts were sold to China beginning in November 2012 and continued for three months because of a lack of Indian supply. However, many shipments were diverted as “cancellations,” causing peanuts to be transshipped to other locations. Issues with tariff law violations were also a problem causing the market to stop. Whether they will return is anybody’s guess.

Farm Bill Factor
Although most farmers have stopped worrying about the Farm Bill, it’s still in the back of their minds. The extension took the pressure off, but who’s manning negotiations for peanut farmers, and can they save something that ultimately protects the farmer and the food supply of the country? The newly drafted Senate Farm Bill finally includes similar legislation to the House bill.

Efforts were made to secure Southern republican votes by adding target prices for rice and peanuts. Rice will be $13.30 per hundredweight, and peanut is $523.77 per ton. Producers of both would have the option to update their yields, but any future countercyclical payments will be calculated on 85 percent of base or historical acres for a farm. In March 2013, the average price was $554 per ton, so countercyclical payments may help peanut farmers in the future.

The bill includes new crop insurance coverage for peanut producers. Senator Thad Cochran, co-chairman in the Senate Ag Committee, has been key, but the major negotiations will likely be on food stamps, and Mississippi is the largest recipient of SNAP, the Supplemental Nutrition Program.

Government Factor
What about peanuts in the loan? USDA’s Marketing Loan Program allows farmers to store peanuts for nine months and receive the loan of $355 per ton average. As peanuts are redeemed or purchased from the loan by the first handler, the loan and interest is repaid to the Commodity Credit Corporation (CCC).

In mid-May, the loan had 1,343,430 tons remaining to be redeemed. Shellers continue to negotiate with the farmer, offering prices for redemption, returning the shrink reduction and offering a slight increase up to $400 net for the peanuts. Some farmers accepted the offers, and others continue to hold. These are peanuts that were not contracted at $600 or more last season. If the farmer loan is not repaid at the end of the nine months, the farmer forfeits the peanuts to the CCC and walks away with no charges.

The CCC does not want peanuts forfeited because of storage costs and reselling, bartering or even converting the peanuts to food aid becomes another job that has to be managed. The CCC also does not want to interrupt regular marketing of peanuts at home or abroad. For the farmer, the volume, whether in government storage or sheller storage, impacts the price of contracts offered for the 2013 season.

Some expect the CCC to lower loan prices below the minimum of $355 per ton to move peanuts out of potential CCC storage. That decision will likely come after peanut planting ends and acreage planted for the 2013 crop cannot change. Timing of the decision could open more export markets and help the industry regain domestic markets. This may help farmers better understand the lack of aggressiveness in forward contracting the 2013 peanut crop and could be a big factor in marketing peanuts from the 2013 crop.

Peanut Usage
USDA predicts peanut usage to be up 3.5 percent, but as of March, peanut usage domestically is down 3.5 percent. Exports are up 67 percent with rawshelled peanuts up 100 percent, in-shells up 215 percent and peanut butter up 15 percent. Increases are positive for the industry.

Next 60 Days
As some of the unknowns are made clear over the next 60 days, it should help peanut producers get a sense of some direction. The industry will know about the new Argentine crop, whether China will begin buying again, if a fiveyear Farm Bill will become a reality, whether the government will lower the loan rate and how many acres farmers really have planted. Excitement is sure to pick up! PG