Thanks To Other Crop Prices, The Market May Firm Up

As the pandemic continues, the peanut market has been relatively quiet for growers and shellers. Buyers have good coverage for 2021, and shellers are not being aggressive to sell with higher prices looming.

But changes in the peanut market are expected. Thanks to rising cotton and corn prices, the peanut market has a firm undertone. Corn is over $5 a bushel, and cotton is 76.5 cents per pound. These prices offer competitive alternatives to planting peanuts, and farmers will want more money to contract peanuts for the 2021 crop.

Current crop prices range from the low to mid-50 cents per pound on a raw basis. Both hard and soft commodities worldwide seem to be in a rising scenario, and an expected increase in demand of all commodities after the pandemic leads to a growing conclusion of higher prices and increased inflation for the foreseeable future.

Farmers are beginning to think about 2021 crop contracting, and an estimated price of at least $475 per farmer-stock ton is needed to draw interest. The increase in cotton prices will possibly lead to a decrease in peanut acreage. The sheller’s dilemma is paying the farmer a higher price if the buyers are not needing to make any purchases. This back and forth has no easy answers but will further develop over the next few months.

The international peanut market is also seeing some firmness. Brazil is completely out of current crop, and Argentina has little inventory available until their new crop is harvested. China continues to show interest for U.S. farmer-stock peanuts, but time will tell if their interest will continue and lead to more purchasing. 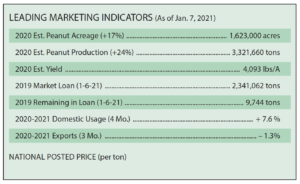 Final estimates for the 2020 peanut crop were released mid-January by the U.S. Department of Agriculture, but too late for publishing. The November estimate was 3,321,500 farmer-stock tons. The trade responded that the estimate was too generous after some late-season weather problems in all three areas.

As of Jan. 6, the Federal-State Inspection Service had inspected 3,051,956 tons, a difference of 269,000 tons and enough to make a difference in marketing decisions. Acreage reported by farmers to the USDA Farm Service Agency was 1,655,831 acres, not 1,623,200 acres as estimated by the USDA National Ag Statistics Service. That is a difference of 32,631 acres, and at 2 tons per acre, that’s an additional 65,000 tons of production added to the estimate.

November was a banner month for peanut usage. Shelled edible grade consumption was up almost 8% from last year. Peanut stocks in commercial storage totaled 4.48 million pounds, down 3.4%. Peanuts used in candy continued at a record pace, up 32%. Peanuts in the snack usage category were up 5.1%, and even peanut butter showed a 7.8% increase in November.

Government purchases for nutrition programs rebounded after being unable to get bids from processors for peanuts and peanut butter.

Another positive for peanuts, the new 2020-2025 USDA Dietary Guidelines for Americans puts peanuts in a favorable position for healthy dietary patterns at every stage of life. Peanut farmers have spent millions studying ways to prevent or mitigate peanut allergy.

According to the guidelines, peanut-containing foods should be introduced during the first year. This is based on landmark studies that showed the introduction of some food products, such as peanuts, after 4 months of age can reduce the risk of peanut allergy.

China keeps buying U.S. peanuts, particularly inshells, but shipments of raw-shelled peanuts are down 24%. Canada and Mexico led buying for raw-shelled and peanut butter. Exports of peanut butter are down 11.8% for the first three months but holding steady since October. Peanut exports are down 1.3% for the same three months of the marketing year, but October 2020 was up 6.8% compared to the same time in 2019.

The top six destinations for U.S. peanut exports in 2019 were:

The European Union imposed a 25% duty on U.S. peanuts, both inshells and kernels. Blanched peanuts are also included because they are classified as kernels upon entering the EU. The duty became effective Nov. 10, 2020, but excludes peanuts loaded and shipped prior to that date. The U.S. Peanut Federation has filed a complaint.

Work To Be Done

All segments of the peanut industry have been blessed with a federal peanut program that has been successful. Keeping that support will require meeting and educating new leaders to understand and appreciate agriculture. For farmers to keep feeding and clothing consumers around the world, it must be profitable.

With demand for peanuts up at home and abroad, coupled with some favorable prices, this year could be a good one for peanuts as we all try to forget 2020.