The peanut industry has been jolted by two hurricanes this season. Florence hit North and South Carolina as harvest was about to start with flooding that caused rivers to overflow and covering crops waiting to be harvested.

With about 40 percent of the Southeast peanut crop dug and harvested, Hurricane Michael plowed into the Florida Panhandle with 155 mile per hour sustained wind destroying cities, crops and valuable infrastructure in a wide and arching path all the way to the East Atlantic Coast.

Officials say that it will take years for rural towns in the heart of agricultural areas from Florida to Virginia to recover. Major destruction followed a path along the Southeastern peanut belt from North Florida, Southeast Alabama, Southwest and Central Georgia and on to South Carolina, North Carolina and Virginia.

Several structures have been damaged or destroyed with heavy damage to trees and power lines. Many locations are without electricity and that brings on problems with peanut harvest. Without electricity in these rural buying points, peanuts cannot be dried for grading and warehouse storage. The Federal State Inspection offices based in Albany had to relocate to Moultrie to provide Internet services that were lacking with no electricity in Albany.

Storm losses will improve market prices and cause come of the industry problems to be answered. Nationally, Congress can’t agree on passing the Farm Bill and face a one-year extension. Leaders are positive on passing the bill in November.

The Trump administration is applying tariffs, and farmers are expecting retaliation on farm products. USDA has tried to help in implementing a payment program for commodities and even bought $12.3 million of peanut butter for nutrition programs. One farmer commented that it may help overall, but it doesn’t help the farmer in the short term.

Reductions for sown area in Georgia and Texas trimmed the total acreage by 75,500 acres to 1.43 million. The forecast yield would remain the second highest on record—just 1.4 percent lower than the record yield and carryover in 2012/13. Peanut carryforward remains at 1,278,000 tons. According to agronomists, peanuts still in the ground have fared well, but with all the trees and power lines still down on small, rural roads, many of them dirt roads, it may be some time before many producers can get their picker into the field.

The Price Loss Coverage (PLC) payment has been announced by USDA for farmers with a farm base. The average farm price of peanuts in 2017 was $458 per ton. USDA announced the PLC payment at $77 per ton. That only applies to 85 percent of the farm base.

USDA would like for these loan peanuts to be redeemed and sold to the trade. USDA wants to avoid forfeitures. Already, 87,000 tons have been forfeited from the 2017 crop. USDA has not indicated a plan to sell the forfeitures. About 90 percent of the 2018 peanut crop has been entered into the loan. 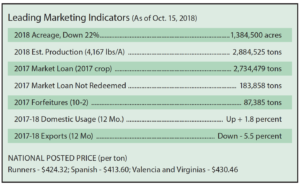 There is a slowing of peanut usage. USDA shows only one month, but it could be a trend. Peanut use in candy is down 10.4 percent, snack peanut usage is up 18 percent, peanut butter down 12.5 percent, with overall usage down 2.67 percent for the first month. These numbers are not a trend, just one month. Peanut usage last year was up 1.8 percent.

In the new North American Free Trade Agreement, U.S. peanuts, both processed and unprocessed, will continue to have duty-free access to both Canada and Mexico, as in the previous agreement. That’s good news for the trading partners. The 25 percent tariff being posed by China could impact shipments, but they have a good crop and are not buying anyway. China is reporting that the 2018 crop is large, so, coupled with a large carryover, don’t look for many exports.

Then there is Argentina. They keep coming back year after year. After terrible harvest weather this past year, indications are that they will plant about the same this coming year. Overall, the uncertainty from storms, tariffs and lack of transparency have the export market is disarray.

The U.S. peanut crop has been hurt, not only in the field, but the infrastructure. Farmers, buying points, shellers and associated businesses have been damaged by the two hurricanes. It will take years to recover and some may not survive. Meanwhile, markets seem secondary when disaster comes.