Michael And Florence, An Unwelcome Couple

Never before have two hurricanes caused such destruction and disruption in the peanut industry. 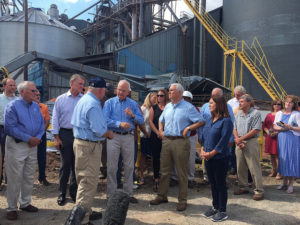 Vice President Mike Pence, who also made an appearance at the Sunbelt Ag Expo, visited farmers and agriculture facilities damaged by Hurricane Michael with U.S. Sens. David Perdue (R-GA) and Johnny Isakson (R-GA) and Agriculture Secretary Sonny Perdue. They were joined by Georgia Gov. Nathan Deal and Rep. Sanford Bishop, plus other state and local officials.

Florence was a powerful storm that weakened before making landfall as a Category 1 hurricane. Michael continued to grow in strength even a little while after landfall. Florence dumped buckets of rain and freshwater flooding was the primary impact. Michael’s 155 mile per hour winds leveled entire towns. From Florida to Virginia, this destructive couple has forever changed the landscape of the peanut industry as well.

A Compounding Of Problems

In the days after Hurricane Michael struck, the Georgia Federal State Inspection Service reported that 54 buying points in Southwest Georgia were without electricity and they were not able to grade and inspect the peanuts. Buying points were also not able to dry the peanuts that farmers have already picked, and most have structural damage to their facilities.

Even after power was restored to the GAFSIS headquarters in Albany, the lack of Internet meant they had to relocate some of their daily operations to their Moultrie district office.

Until the storm, weather in the Southeast had been ideal for peanut harvest with hot, dry conditions, sometimes too dry.

Hurricane Florence crept onshore in mid-September bringing lots of rain, as much as 20 inches in some areas. This type of catastrophic freshwater can get worse in the days and weeks after the storm as rivers and streams continue to rise. The storms in North Carolina and South Carolina caused some peanuts to be lost, but possibly not as much as early estimates.

After Florence, Clemson Extension peanut specialist, Dan Anco, was reminding producers about airplane fungicide applications, which could help provide coverage where fields are too wet to drive the sprayer.

“If earlier Virginia type fields are too wet to be dug on time and get delayed about a week, there may still be peanuts worth digging, but this also depends on how healthy the vines are and how advanced or tight the maturity was. Runner peg strength provides more leeway than Virginia types that can drop off quicker once they pass the black pod stage.”

He also recommended that once the ground was dry enough to prevent bogging and ruts, digging a few passes in a field where digging was delayed can help provide a visual on what the potential crop looks like.

“Peanuts can usually survive three days of being under water,” he says.

An August drought on top of a wide range of planting dates in May and June had caused considerable variation in the North Carolina peanut crop, says David Jordan, North Carolina State Extension peanut specialist.

“A final contributing factor has been rainfall from both Hurricanes Florence and Michael. Although fields recovered from Hurricane Florence relatively well, rain from typical weather patterns and more recently Hurricane Michael limited field operations in some areas of the region.”

Jordan says, unlike Florence, Hurricane Michael moved through the V-C region relatively quickly and limited the amount of rainfall received. Yield potential remains at around 3,700 pounds per acre and quality is generally good but not optimum.

Overall, this will be one of the longest and slowest harvest periods ever and the extent of the impact from the weather this fall may not be known for months.